U.S. data that shows a considerable build up in commercial crude oil inventories is a non-factor for prices given the lingering impact of the deep freeze in Texas. All eyes instead are on the oil cartel OPEC, analysts told Zenger News.

A build in commercial crude oil inventories would usually be a sign of faltering demand, though much of the U.S. oil sector is still recovering from the mid-February freeze that stifled production and refinery output across the Gulf Coast. That suggests recent data should be reviewed with a degree of caution.

Denton Cinquegrana, the chief oil analyst at the Oil Price Information Service, said from New York that refineries were still struggling to return to full service. That in part would explain the big drain in storage levels of petroleum products as refiners work to catch up. Gasoline inventories declined 13.6 million barrels, while the levels of distillates, a product that includes diesel, dropped some 9.9 million barrels. The refinery issues are evidenced elsewhere by the build in crude oil inventories.

On the broader demand equation, the federal energy data showed total petroleum product supplied, a proxy for demand, averaged 19.5 million barrels per day for the four-week period ending Feb. 26. That’s down 3.9 percent from the previous week, but far better than the four-week average of 18.7 million that started the year. 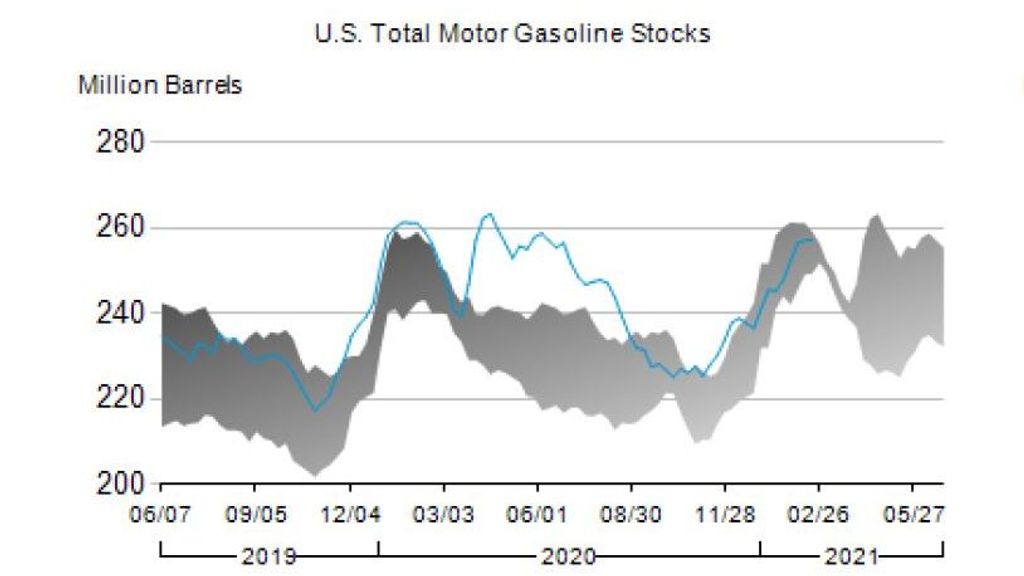 But Cinquegrana said Energy Information Administration data and the impact of the Texas freeze won’t be the dominating factor for the price of oil for the rest of the week. That honor goes to two dozen or so producers working as OPEC+ — the Organization of Petroleum Countries and their allies — to balance the market. The group met March 4 and decided to hold firm on production levels in April.

The market seemed to expect OPEC+, led by Russia and Saudi Arabia, to stand pat, and it was right. The price for Brent crude oil, the global benchmark, was up about 3 percent in trading on March 3 to hit $64.43 per barrel, a rally that was not indicative of expectations of more crude oil coming on the market. After the production group opted to stay the course, rather than release more barrels on the market, the price on March 4 shot up another 4.5 percent.

Tamas Varga, an analyst at London oil broker PVM, said from London that federal energy data wasn’t a factor in OPEC decision-making. Before the energy data were released, OPEC Secretary General Mohammad Barkindo said the global economic outlook continued to show signs of improvement, something that would hint at a desire to relax on restraint. Elsewhere, however, he made a strong case for cautious optimism.

Varga said he expected OPEC to allow for another 1.2 million barrels per day. But reflecting the uncertainty, Phil Flynn, an energy analyst at The Price Futures Group in Chicago said the underlying demand trends are supportive of higher prices.

“Talk that OPEC might not cut as much as expected is supporting” the price of oil, he added.

The decision to only allow for smaller production allowances from Russia and Kazakhstan caught the market largely on its back foot. Ann-Louise Hittle, an oil analyst at consultancy Wood Mackenzie, said in a statement that, with inflationary pressures already emerging, there is a risk that “higher (oil) prices will dampen the tentative recovery.