If the long list of characters seems vaguely familiar… Vice will set you straight. Not only does it give a closeup view of Dick Cheney and his agenda, it threads together all the people and machinations that led the country into a misguided war in the aftermath of 9/11 and a severe financial crisis.

It was an historic power grab. Not the Republicans taking back the White House after a controversial, razor-thin win by George W. Bush over Al Gore. It was the vice president-elect, Dick Cheney, out-maneuvering George Jr. and becoming the puppet master. Cheney: “No one has shown the world the true power of the presidency.” If one quarter of this searing and satirical film is true, the filmmakers may have made a mistake titling the film Vice. Some viewers may think this bio/drama should have been called Dick.

Writer/director Adam McKay is no stranger to politics and news-related projects. He won a Best Adapted Screenplay Oscar for The Big Short, a comic exposé on the mortgage scandal that brought on the 2007 recession. As a former writer on Saturday Night Live, he turned current events into biting satire. That skill comes in handy with his innate handling of a bleak period in time that most people would like to forget but are still curious about the behind-the-scenes scoop. With a well-researched script, Adams tackles the sordid details of a cunning, ambitious man who ran the country into the ground.

Hats off to McKay and the casting director (Francine Maisler, The Revenant) for assembling a stellar ensemble: Chameleon actor Christian Bale (The Machinist, Rescue Dawn, The Dark Knight) embodies Richard Bruce “Dick” Cheney in every frame. Yes, he gained the weight, grayed his hair and donned the glasses. But the full effect of his uncanny portrayal is in his low, gravelly voice, the bent over head, slouching posture and very deliberate walk that evoke the film’s central figure in the eeriest way. It’s an impressive transformation, not to be confused with being an impersonation. For many audience members, Bale’s uncanny Cheney aura is the image of the VP that will linger. 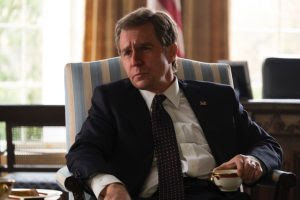 Though Sam Rockwell (Three Billboards Outside Ebbing, Missouriand Moon) doesn’t look like George W. Bush, his interpretation of the party boy turned governor and gullible president is dead-on. The friendly Texas accent and accommodating demeanor sets him up to be the naïve rooster who invites a fox into his henhouse. Amy Adams gives certain power to the very demanding, king-maker wife Lynne Cheney. Steve Carell’s depiction of Donald Rumsfeld—businessman, congressman, White House Chief of Staff, Secretary of Defense and co-architect of wars in Afghanistan and Iraq—rings true.

If that long list of characters seems vaguely familiar but you don’t quite remember who was zooming who, then Vicewill set you straight. Not only does it give a closeup view of Dick Cheney and his agenda, it threads together all the people and machinations that led the country into a misguided war in the aftermath of 9/11 and a severe financial crisis. 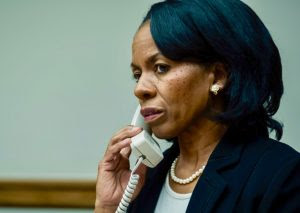 McKay’s script is clear. It’s easy enough to follow the trail of lies, deceit and power plays. Easy to track Cheney’s backstory and the high and low points in his life: flunked out of Yale, a blue-collar job, an internship in Nixon administration, heart attacks, adjusting to having a lesbian daughter and a stint as the CEO of Halliburton, the company that received a billions-of-dollars no-bid contract for reconstruction work in Iraq.

McKay’s wink and nod direction makes a trainload of facts, figures and individuals easy to digest. Even if what he is presenting is obviously one-sided and almost as pitiless as the main character. The writer/director’s very smirky comic touch adds a teaspoon of sugar to some very bitter medicine.

Looking over McKay’s shoulder is the very skilled editor Hank Corwin (The Big Short) who masterfully pieces together humorous, dramatic and informative scenes with cutaways to provocative images (e.g. a heart beating on its own) into a visually engaging montage. 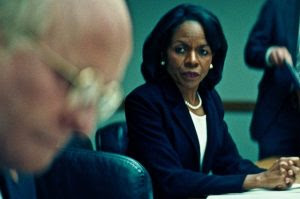 Red state audiences will yawn. Blue state audiences will be outraged and see parallels with the current administration. What both sides of the aisle will witness is a barrage of revealing information about politicians and events that significantly changed history—not necessarily for the better.