1. How we arrived at Cam Newton

The evolution probably began with Fran Tarkenton. He was fast and fairly accurate, one of the first true dual-threat quarterbacks, though without much size.

It continued with names like Roger Staubach and Detroit’s Greg Landry. James Harris made the Pro Bowl in 1974 and remains one of the NFL‘s underrated pioneers—not only because he was the first black QB to start and win an NFL playoff game, but also because of his skill set.

Then there was John Elway. On and on the evolution went. QBs would get slightly faster, slightly stronger, slightly bigger, and eventually the throwing accuracy would catch up with the evolving prototype. Then, the evolution hit on two key players in the late ’80s.

The first was Randall Cunningham, perhaps the most explosive running quarterback to play the game. Cunningham was not an accurate passer, but he turned average receivers into solid threats because defenses were so scared of his running ability. Opposing teams shifted resources to stopping him, allowing receivers to get open.

The second was Steve Young, and he was the real key in the evolution of the quarterback position to its current form—a form embodied by soon-to-be MVP and Super Bowl-favored Cam Newton.

In many ways, Young was the first Cam. Please let me explain.

Young was the first quarterback in history who was just as effective throwing from the pocket as he was running the ball. He won a record six passer-rating titles and retired with the most rushing TDs and second-most rushing yards (to Cunningham) for a quarterback in the Super Bowl era.

There have been other pivotal players along the evolution timeline—Kordell Stewart, Michael Vick, Steve McNair, Donovan McNabb, and now Aaron Rodgers and Russell Wilson—but Young was the key blip. He became the prototype.

And it’s from that Young prototype that Newton evolved as the new prototype: a QB who can pass with accuracy, run explosively and has great physical size.

It’s like the evolution went haywire. This latest step is the quarterback developmental equivalent of going from a Porsche (Young) to a starship that runs on a matter-antimatter drive (Newton).

Newton is 6’5″ and weighs about 245 pounds. Bruce Smith, one of the best pass-rushers of all time, played at 6’4″ and 265 pounds. So Newton is almost the same size as a Hall of Fame defensive end. Young, by comparison, is 6’2″ and weighed 215 pounds when he played.

There has never been a quarterback as big, fast and powerful as Newton. None have even come close.

“He is able to do things that no quarterback has ever done physically in this league,” former quarterback Steve Beuerlein said on the CBS showNFL Monday QB.

Do you understand what the evolution-revolution is now? Do you get why Newton might be the most dangerous quarterback weapon we’ve ever seen?

It’s possible that Newton is the end of this scale. It’s hard to imagine a bigger, faster quarterback. Will there be a quarterback to come along who’s 6’7″ and 260 and can do what Newton does? Maybe in 100 years, but still…probably not.

The evolution has been long and steady, but it took a large, seismic leap with Newton. Like it did with Cunningham and Young before him. 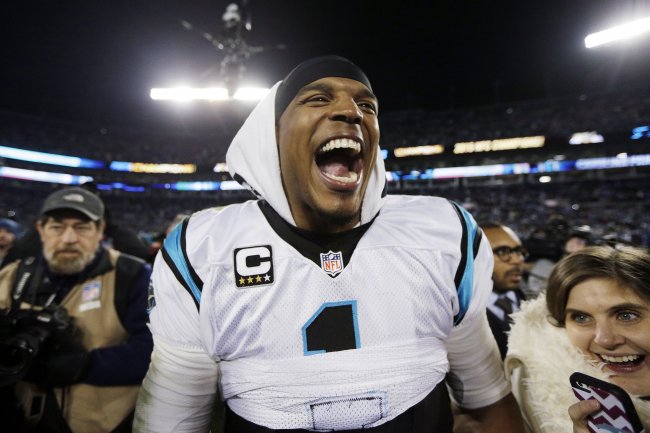 Newton was also perhaps the most divisive draft pick of all time.

This rip job of Newton by Nolan Nawrocki in Pro Football Weekly in 2011 remains one of the most stunning things I’ve ever seen written about a prospect. This was the key part (via Pro Football Talk’s Mike Florio):

Very disingenuous—has a fake smile, comes off as very scripted and has a selfish, me-first makeup. Always knows where the cameras are and plays to them. Has an enormous ego with a sense of entitlement that continually invites trouble and makes him believe he is above the law—does not command respect from teammates and will always struggle to win a locker room. … Lacks accountability, focus and trustworthiness—is not punctual, seeks shortcuts and sets a bad example. Immature and has had issues with authority. Not dependable.

Nawrocki wasn’t the only one ripping Newton, and yeah, we all get things wrong. I thought Christian Ponder would be a star.

Yet looking back at the harshness of those critiques (and many, many others) is instructive and helps us understand the ridiculous criticism Newton still receives.

Some of the criticism (some) was, and is, race-based, but also a significant part of it is personality-based. (There’s also an intertwining of the two.) Newton is new-school, a representative of the changing dynamics and culture of the NFL. There are a significant number of people who still expect their quarterbacks to look and act a certain way. Newton doesn’t check those boxes.

They hate the way Newton acts, so they refuse to accept how good he is.

The interesting part is that Newton does act with class and grace.

But dabbing is just celebrating, not so different from the Lambeau Leap. Off the field, he doesn’t get in a lick of trouble. He works as hard as anyone in the sport.

Newton has proved there’s nothing disingenuous about him. Not his smile, and certainly not his game.

3. This was actually once a debate

Just let this magazine cover sink in for one second. This was actually a big argument. Who would be better: Newton, Blaine Gabbert or Jake Locker?